Can I Get a Tattoo If I Have Psoriasis? 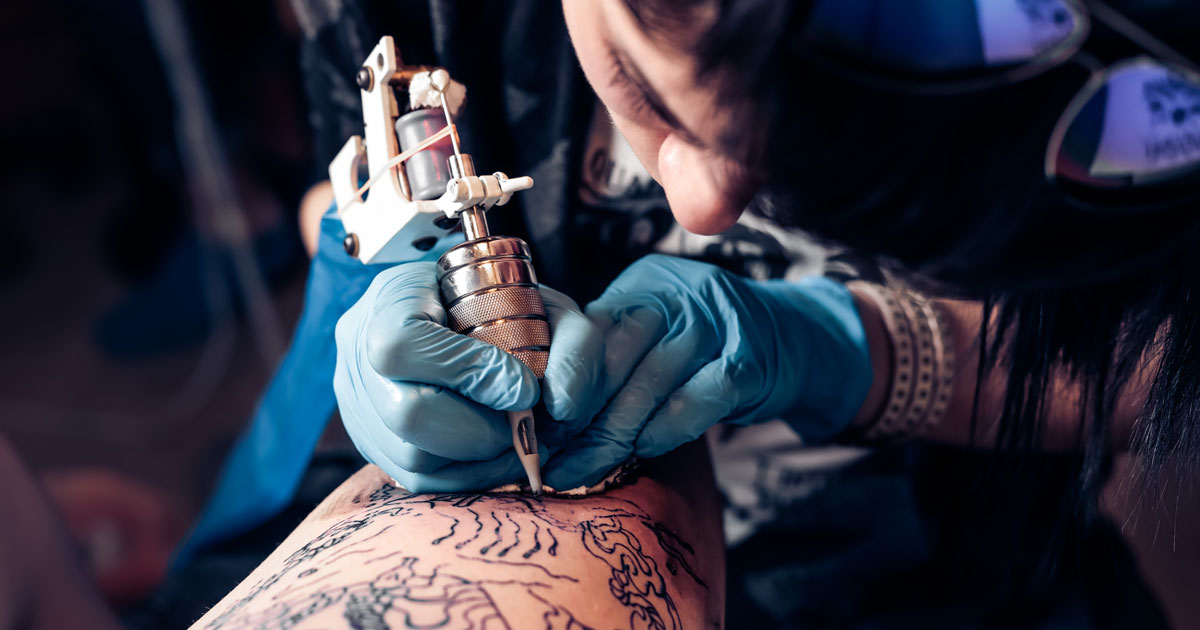 Do Psoriasis and Tattoos Mix?

Tattoos are a form of self-expression and have been around for centuries. On any given day, you’re apt to see someone with a visible tattoo while walking down the street.

With the ever-growing popularity of tattoos, you may be wondering about the safety of tattoos if you have psoriasis.

Below, we’ve outlined some safety considerations for you about psoriasis and tattoos.

According to the Journal of Medicine and Life, the Koebner phenomenon is, “the development of several inflammatory skin lesions (psoriasis, lichen planus, vitiligo, etc.) in uninvolved skin following various traumatic insults.”

For someone with psoriasis, this may mean that psoriatic lesions may develop following trauma to the skin.

It is estimated that 25% of people with psoriasis may suffer from lesions caused by the Koebner phenomenon following a trauma to the skin — and this can include tattooing.

The Journal of Medicine and Life did a case study on a real-life subject regarding the Koebner phenomenon. The subject was a 27-year-old male with psoriasis of the scalp, trunk, and arms. The lesions occurred on the trunk and arms two weeks post-tattoo when he was 18; he was diagnosed with scalp psoriasis when he was 14.

For four years before the tattooing, the subject had psoriasis that was limited to his scalp. After the tattoo, the psoriasis can spread to other areas of the body and was difficult to manage from that point on.

With the Koebner phenomenon, lesions appear in 10 to 20 days, although they can appear in three days to two years post-trauma. Other traumas may include burns, physical trauma, insect bites, allergic reactions, medications, acupuncture, surgical incisions and radiation exposure.

Although there is little studied about tattoos causing psoriasis, it has often been coined as “tattoo-induced psoriasis.”

Psoriasis and Tattoos – Making Your Statement

Three in ten Americans have at least one tattoo, this according to a recent Harris Poll. Tattoos tend to be very acceptable these days, and they are particularly important for many with psoriasis.

Tattoos are a great way to express yourself. Unfortunately, tattoos cannot cover plagues and patchy skin spots. You also cannot place tattoos in areas of the body more to psoriasis breakouts, such as the scalp, elbows, and knees.

While you cannot cover embarrassing skin spots on your body, body art is a beautiful way to make your statement. It may also give you more confidence about showing your psoriasis-affected skin.

What Are the Risks?

If you are thinking about getting a tattoo, there some risks you should know about.

The most important thing to consider is that tattoos break into your skin, cause bleeding and bring with them a variety of risks, including:

Your risk of infection is increased if you take immunosuppressants to treat psoriasis. These medications weaken the immune and make it harder for it to fight off bacteria.

It is also possible to have an infection even if you don’t take immunosuppressants. In fact, one study reported in the December 2011 Journal of the American Academy of Dermatology finds that people with psoriasis are twice as likely to be likely to be hospitalized for infections.

There are specific rules for sanitizing tools and needles set by Occupational Safety and Health Administration (OSHA), but there are no guarantee tattoo parlors will follow them. Not following OSHA guidelines can put a person at risk for developing a serious illness – for example, HIV, tuberculous, or hepatitis.

A review of studies in the March 2016 issue of Dermatology and Therapy found the red ink used in some tattoos can cause allergic skin reactions. These studies reviewed were general public studies, and not necessarily related to people with psoriasis.

It is important to know your triggers. Skin trauma can result from tattoo needling, and it is possible these flares can be serious and last for more extended periods than you are used to.

It is also possible psoriasis plagues can occur in the newly tattooed areas, even those you did not have previously have plaques in those spots.

You shouldn’t get a tattoo if you are in the middle of a flare. This can aggravate your skin further, worsen the flare, and increase your chances of an infection or allergic reaction.

Some states may have laws preventing tattoo parlors from giving tattoos to people with skin lesions, sunburns, skin diseases and/or other skin problems. You may want to look into whether your state’s laws prohibit you from getting a tattoo.

You should also check with your doctor if any medications you take will affect your ability to get a tattoo. For example, topical steroid skin creams cause the skin to thin, possibly leading to skin breaks and bleeding.

Dermatologists may be a better position to answer questions about getting your skin tattooed. If you have a dermatologist, ask that person about safety considerations and potential risks.

You may want to start with a small tattoo so you can see how your skin reacts to tattooing. After that, you can decide if you want to get more tattoos.

Also, take into consideration that if you have skin patches and plaques, tattoos cannot be applied correctly. These skin areas are at higher risk for infection or allergic reaction.

Next page: Thinking about getting a tattoo? Continue reading to learn about psoriasis and tattoos safe practices and how to care for your tattoo.

Krystina Ostermeyer
Krysti is a practicing RN who also enjoys writing about health and wellness. She writes for a variety of NewLifeOutlook communities, as her ten years of nursing experience has enabled her to help many people with a variety of chronic conditions in her career. See all of Krystina's articles
More Articles by Krystina